Another attempt at nice forum thingy.

Fine fine, here it goes then:

Nowhere else in Europe has quite that perfect mix of civilization and barbarism as my beloved city does. Why I can't imagine any other place where I could walk out of my warm apartment with one of the fastest internet connections in Europe and just walk down my street and still feel that fear deep inside me making my sfincter semi-contract every couple of seconds when some huge lout walks past me giving me the once-over to see if he could kick my ass in a fight. Where else could I drive my german car with super-human levels of skill avoiding even the slightest infringement on other driver's ‘personal space’ and STILL be one step away from getting my window punched in when a gipsy in a brand spanking new 100.000 euro mercedes decides he's had a bad day and I look just small enough to beat up. Where indeed can a man see a million dollar Ferrari behind a million dollar Lambo next to delapidated house inhabited by drifters and STILL be in the center of town, the very center of civilisation in his country. 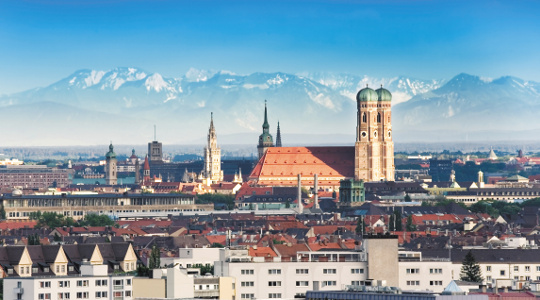 I'm an introvert and Munich is a city for introverts. Other cities in Germany like Berlin, Hamburg or Cologne are hip, artsy, young and adventurous. And they hate Munich, because they think it's a snobby place full of rich and conservative people. They think it's a boring city. Hell yes, it is. I love it that way. Munich has the second-highest percentage of immigrants of german big cities, higher than Berlin, Hamburg or Cologne. And you know what? Noone cares. They just live here and at summer time we meet in the beergarden. Munich is the economic motor of Germany. And how do we do it? We have the most holidays of all germans states and try not to work too hard. Northern Germany has “protestant work ethics”, Munich has Gemütlichkeit - “easy-going”. Munich doesn't try and succeeds by accident.
I can hop on a train and an hour later i'm climbing the alps. Or two hours and i'm watching japanese tourists looking at castle Neuschwanstein. My night club is the Deutsches Museum. Oktoberfest? That's for tourists. Most Munich people don't go there. Munichs folk hero is a blacksmith who died in a poorly thought-out peasant rebellion - DEFENDING the monarch. We even have the biggest St. Patrick's Day parade east of Ireland. ;)
Come visit Munich and just do nothing!
Posted 8 Jan 2016, 3:24 p.m.
0 |

I don´t like Munich. It´s a snobby place full of rich and conservative people. Those guys would rather split off from Germany than put a wind plant on their idyllic state. Actually, why haven´t they yet? They don´t even share the same politic parties as the other federal states?

Those guys would rather split off from Germany than put a wind plant on their idyllic state. Actually, why haven´t they yet? They don´t even share the same politic parties as the other federal states?

You're taking about Bavaria. Munich has been ruled by the Socialdemocratic Party since the beginning of time. Nobody here cares about splitting off.
Also we have a wind turbine in the city. One whole wind turbine!

Back to topic. How much is a cheap room in Munich? Because that could potentially be a problem from what I´m hearing. Also, what building is that in the foreground of the picture? It seems interesting.

There are no cheap rooms in Munich. My small one and a half room flat is 450 Euro. I payed half of that for a bigger room in Berlin. Money is a problem.

The building is an exciting wastewater treatment plant. The wind turbine is planted on an overgrown former garbage dump. And next to it is FC Bayern Munichs Allianz Arena.
All the shit in one place.
Posted 9 Jan 2016, 5:07 p.m.
0 |

I'm so glad it's banned here and I can laugh at all the silly Danes who have to buy it online.

“Denmark’s long battle with the EU over the right to sell snus has ended in defeat for the Scandinavian nation.”- thelocal.dk